Tech Togs: The Apogee of Personalization 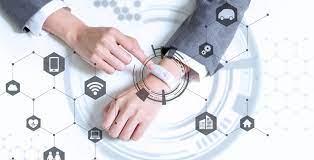 Whole new kinds of interaction mechanisms emerge, and our understanding of and relationship with technology is changing fundamentally. The success of a variety of enterprises depends increasingly on their ability to recognize, comprehend, and take advantage of the rapidly expanding wearable market.

In the area of wearable technology, there have been several recent disruptive technologies that have the potential to change daily life, business, and the global economy.

What does it mean?

Electronic gadgets or technologies that may be comfortably worn on the body are called "wearables." Information is tracked in real-time using these wearable gadgets. They are equipped with motion sensors that record your daily activities and sync them with laptops or mobile devices. Wearable electronics are the next major development in technology after the creation of smartphones. The area of ubiquitous computing, as well as the origins and advancement of wearable computers, are all connected to wearable technology. Wearable technology and ubiquitous computing share the goal of integrating technology into daily life, making it omnipresent and reducing friction in interaction. This concept has been contrasted and confirmed throughout wearable computing history and development.

The Detonation of Wearables

Wearable technology has advanced in a variety of previously unthinkable areas. Using wearables to link brands with their audiences has intriguing possibilities. The gadgets may collect detailed information on a customer's location, behavior, and activity levels, which can be used to send individualized marketing messages. But acquiring data is just the beginning; forward-thinking companies are also considering how to design marketing strategies that make use of the special capabilities of wearable technology.

Numerous wearables allow you to measure your physical activity and store information for future reference. We may use this as a valuable tool to create both immediate and long-term objectives and monitor our progress in achieving them. Wearables may also be an inspiration and motivator by providing actual updates about our activities, such as prompts to stand or walk.

The confidentiality of your data

The security protections used by many wearables to protect data are typically minimal or non-existent. Given that much of this data is not secured and that some of these gadgets communicate data over Wi-Fi or Bluetooth connections, fraudsters may simply obtain access to it. Static assets like files and documents or dynamic assets like credit card numbers might both be lost in the incident. Ultimately, it will result in the loss of data, money, or even safety. Without your consent, businesses may use this information for marketing and health-related purposes. There are useful applications for this data, but like with any large data set, there is a potential that it might also be abused. The majority of wearable data now accessible isn't lucrative enough for hackers to seek.

Over the projection timeframe, it is predicted that the demand for wearable technology will increase due to the growing popularity of linked devices and the IoT, and even the rapidly expanding worldwide population of technologically savvy individuals. The size of the wearable technology market is anticipated to increase from USD 116.2 billion in 2021 to USD 265.4 billion by 2026, with a CAGR of 18.0% throughout that period. And through 2025, the number of wearable devices utilized in the workplace will grow at an astounding 41 % CAGR.

Thus, due to its versatility and ease of use, wearable technology is becoming more and more popular. WT provides real-time data transfer, which improves capabilities, but it also increases security and privacy issues. The market adoption of WT would be hampered by these two significant issues. But wearables offer new opportunities to monitor human activity and also help companies use customer data for marketing purposes.