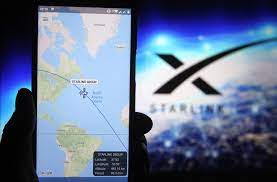 Starlink, a satellite network, is on schedule to provide broadband internet to everyone on the planet by August 2021, with the exception of the polar regions.

Musk said during a presentation at the Mobile World Congress that Space Exploration Technologies Corp. has launched over 1,500 satellites and has Starlink operations in approximately a dozen nations.

He went on to say that it is expensive, estimating that SpaceX's total investment in the network will be between $5 billion and $10 billion before cash flow is positive.

Elon Musk stated that the network recently exceeded the strategically significant number of 69,420 active members and is on its way to a few hundred thousand, if not over 5,00,000, users within the next 12 months.

Elon Musk's SpaceX plans to provide broadband to up to 5% of the world's population where traditional fibre and wireless networks are unable to reach.

• The company has already struck two agreements with major telecom carriers in the country and is in talks with others. For these networks, Starlink will provide the so-called "data back haul" spines.

Starlink satellites are now available in a new version:

During an update on the $75 billion SpaceX business, Elon Musk also mentioned a few more modifications in the pipeline.

In 2022, the business plans to launch a new generation of Starlink satellites with inter-satellite laser links to aid in the coverage of the polar areas. To save losses, its engineers have been working on a new ground terminal: the dishes that customers are currently placing on rooftops cost more than $1000 to produce but barely cost half that at retail.

SpaceX, led by Elon Musk, is also preparing an orbital mission for its massive Starship rocket in the coming months.

Thousands of small satellites in low Earth orbit will interact with approved ground transceivers to form the constellation of satellites. In May 2018, the cost of the decade-long project was anticipated to reach at least $10 billion