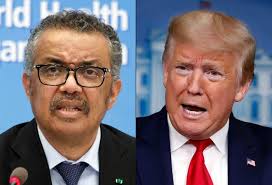 In a diversionary move, President Donald Trump has withdrawn US funding from the World Health Organization at a critical point in a Coronavirus pandemic.

The US government has withdrawn $400 million a year from WHO accounts, claiming the UN agency manages and covers up the spread of COVID-19. President Donald Trump has announced he will stop funding the World Health Organization while a review takes place. The decision on whether to resume funding will be made after the review, which Trump says will take two to three months.

Donald Trump has announced that the United States will suspend World Health Organization funding while his administration reviews what he calls the WHO's failure to cover up an outbreak of the coronavirus in China. Trump's announcement comes after he furiously defended the U.N. agency's handling of the outbreak and its response. As questions arose about the crisis, which he downplayed and ignored, Trump sought to downplay, and in some cases ignore, the WHO and the news media, including the New York Times, the Washington Post, and other major media outlets.

The WHO has been accused of hypocrisy by Trump for opposing the travel ban and repeatedly claiming that the virus cannot be transmitted from person to person. The WHO, which he accuses of ignoring the US president and failing to act in time, said it was "seriously concerned" about the WHO's failure to declare a public health emergency.

The US president also threatened to withdraw from the organisation, saying: "We will have no choice but to do so unless the group changes its actions." The decision to suspend funding follows the WHO's response to the well-underway coronavirus pandemic in the United States in 2015.
Trump has pulled out of global climate agreements, questioned US funding of the United Nations and denigrated the World Trade Organizations.

Congressional Democrats on Tuesday night disputed Trump's claim that he unilaterally halted WTO funding. Democratic Senator Chris Murphy of Connecticut, who sits on the Senate Foreign Relations Committee, said Tuesday that if the WHO and China made a mistake, Trump would also blame his own administration. If we had acted appropriately, he could have imposed a travel ban on people from China, "Trump said Tuesday.

Trump complained that the WHO was "China-centric" and said the country sends $500 million a year to the organization. The WHO said that if the virus is not defeated around the world, the United States will remain at risk and Trump should not take valuable resources from the fight.
The United States is the largest single donor, donating between $400 million and $500 million annually to the Geneva-based organization in recent years. The United States is also a major contributor, accounting for about 15 percent of the agency's budget, according to WHO figures.

Trump said he had directed his administration to suspend funding pending a review of the WHO's decision to allocate more than $1.5 billion over the past two years to serious mismanagement and cover-up of the spread of the coronavirus.

Overnight in the US, President Donald Trump announced his intention to withdraw funding from the World Health Organization, which coordinates and advises national responses to COVID-19. Tedros said the WHO, a United Nations division that deals with pandemics, is being evaluated by member countries and independent organizations. The president was recently embroiled in a dispute with the WHO department at the UN General Assembly over how to deal with Ebola.

Trump said, according to the New York Times, that the WHO had pushed China's misinformation about the virus before announcing it would cut off funding.

Congressional Democrats blasted Trump's plan when he appeared in the Rose Garden and made the announcement. The US is the WHO's largest donor, contributing $893 million in 2015, according to the World Health Organization's annual report, and the first US president has criticized China for funneling only about $40 million a year into WHO coffers. World leaders have enabled the group to defend China and ensure that the WHO misleads the world about Covid 19, which the Trump administration says it misled.

As an international community, we must critically examine what went wrong in the global response, what went right, and learn from it so that we do not repeat the same mistakes, "said Senator Jeff Merkley of Oregon.

US President Donald Trump has threatened to cut off funding to the United Nations World Health Organization, and experts fear that cutting much of WHO funding could have a devastating impact on the WHO's response to the Ebola outbreak in West Africa. Leaders have tried to resist a public spat with Trump by simply saying that in the midst of a pandemic, the time is not right for a funding fight. Although we do not yet know what the funding freeze might look like, or whether Mr. Trump has the authority to pull out, experts fear that cutting off large portions of WHO funding could have a devastating impact on their work in Africa and the Middle East.