'Unprecedented': Kazakhstan's Massive Protests Have Sent Shockwaves Around the World 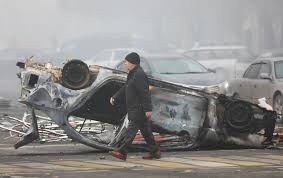 What started as protests over rising petrol costs has turned into the most serious upheaval Kazakhstan, a major energy exporter and long a beacon of stability among former Soviet governments, has seen in decades.

On January 6th, Maximilian Hess, a Russian and Central Asian expert and fellow at the Foreign Policy Research Institute said, "I've never seen anything like this in Kazakhstan." "It's a once-in-a-lifetime opportunity."

According to Kazakhstani media, dozens of demonstrators have been slain. Protesters set fire to government buildings in Almaty's business centre and took control of the airport, which was retaken by armed forces by the end of the night.

The internet has been taken down, and Kazakh President Kassym-Jomart Tokayev has requested aid from Russia, which has responded by dispatching troops from the Collective Security Treaty Organization, a Moscow-led military alliance of former Soviet states. The arrival of Russian paratroopers in Kazakhstan has reawakened uneasy memories of the country's time under Soviet rule.

How did it start?

Unrest erupted after Kazakhstan's government declared that price limitations on liquefied petroleum gas, which the majority of Kazakhs use to power their vehicles, would be lifted. Allowing the market to determine LPG pricing resulted in most Kazakhs paying nearly twice for their gas during the new year period. The impact was particularly severe in Kazakhstan's western Mangystau province, where, despite living in a country rich in oil and gas, living circumstances remain poor. Monthly salaries are frequently in the hundreds of dollars, and price increases in a fundamental necessity like gas are excruciating.

Kazakhstan, with a population of roughly 20 million people and the second-largest oil production among the ex-Soviet members in the OPEC+ coalition, has long been perceived as having an authoritarian government. Tokayev promised political and economic reforms when he took office in 2019, but critics and country analysts believe progress has been slow.

In an effort to pacify the populace, the government halted the fuel price hikes. However, rallies triggered by outrage over the relaxation of LPG price limitations are now taking on a more political tone, with calls for democratic change being made.

"The demonstrators' slogans went well beyond objecting to the country's leadership disputing the recent lifting of price regulations for transport gasoline," said Nick Coleman, a senior editor for oil news at S&P Global Platts who spent several years in Kazakhstan. "In that way, the worries are comparable to those that have arisen in a number of other ex-Soviet countries in recent years."

The Kazakh authorities aren't having it. Tokayev has already accused the protestors of being involved in a foreign terrorist plot, promising to be "as tough as possible" in the face of the protests. The West has already been blamed by some Russian state media sources for the upheaval.

Former President Nursultan Nazarbayev, a crucial figure, has been silent so far. During the Soviet Union, Nazarbayev was the head of the Communist Party, and he rode the wave of capitalism to become Kazakhstan's first president from 1990 to 2019, during which time he and his family became millions and billions.

He stepped down in 2019 and was replaced by Tokayev, who is considered as weak in clout — "yet the Nazarbayev family still runs the show," Timothy Ash, senior emerging markets strategist at Bluebay Asset Management, said. "In Kazakhstan, there has long been disquiet about Nazarbayev's repressive government... the populace may have had enough."

Is there going to be a 'wide-ranging' crackdown?

With half of the country's internet down, it's difficult to know what's going on the ground between demonstrators and Russian "peacekeeping forces," as the Kremlin refers to the CSTO forces now in Kazakhstan.

"It appears that 'order' will be restored in Kazakhstan, but only with Russian/CSTO forces' assistance," Ash wrote in an email on Thursday. "The ensuing crackdown will almost certainly be extensive."

"While Moscow is likely surprised at how quickly the unrest spread and Kazakh security forces were overwhelmed, Moscow has still tried to profit from the crisis," Ash said, drawing a parallel with Russia's offer to assist its Belarusian ally, dictator Alexander Lukashenko, in the face of popular protests last year in Belarus.

"What we're seeing as a result is Russia tightening its grip on the near abroad — as a result, Russia is diminishing the sovereignty of Belarus and Kazakhstan," Ash said, adding that a less free region "sees economic stagnation, out migration, and deterioration." The block's security may be stronger, but the long-term economic prospects is poorer as a result."